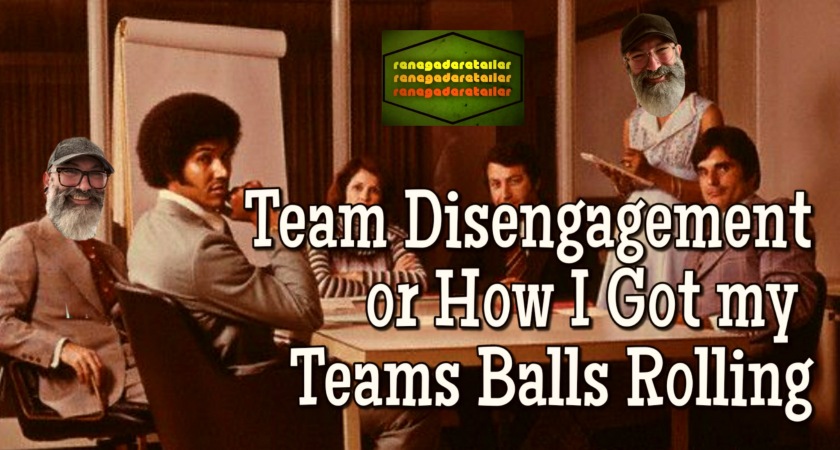 Well, it was a normal winter Wednesday in Montreal, -25c, windy, snowy and just a day you wanted to stay in bed with your dog at your feet. …..but that wasn’t going to happen in any way shape or form.

This was a going to be aday that was going to tear open a hole in the Retail time and space continuum that will impact 8 Managers and myself in a hefty way. No, no one got sick, died, quit, forgot to wear pants or announced that they were joining a cult (I have had that happen). It will be an impact that will set the wheels in motion to bring over 100,000$ in bonus money to the Team a year later.

What happened next, well was sort of planned, at least the meeting portion was but it’s direction wasn’t. So sit back, buckle up and get ready for whatever my big brain on Brad tells my fingers to type.

👉This was supposed to be a “Normal” meeting with the usual downloading on the Agenda to review the prior year and set my Team up for the year upon us. The last several months, weeks, and days have been hard for all of us because of a ton of downloading of new initiatives, programs, and cutbacks due to not achieving the financial goals. Due to all of this pressure and change, naturally my Team wasn’t feeling at their best.

The meeting started promptly at 8am with the usual doughnuts, coffee and every sugary candy I could find at the corner store. So not only did I have a Team who had enough caffeinated frustrations stored in them to blast a missile towards me, the sugar was their Knight Rider Turbo Boost.

The meeting continued rolling for about an hour, but during this time there was none of the usual kidding between the Managers, everyone’s head was to the ground and the agenda was on time…this was not normal.

There I was with a Team of 8 highly Talented Managers who at this moment either wanted to throw me through the wall or hand me their resignations. My brain was racing through scenarios as to what my next step should and could be. Do I continue this meeting, Do I call a break, Do I say I need to get something from my car and just drive away into the snowy tundra we call Canada?

Nope, I did something I never did before in slow motion; as it seemed right at that moment in time.

👉So, this is where the wheel hit the pavement. I slowly stood up, cleared my throat and started to talk from my heart. I only had this one chance to say what I believe they were thinking by sharing with them what I thought was up and what I was going through as well. I needed to be as transparent as the clear tape you cannot find Christmas eve to wrap those final gifts.

It was going to be a rough few minutes navigating between supporting my Team and towing the Company line.

But anyone who knows me, knows I throw caution to the wind and let the chips fall where they may.

So, by taking this chance, I either:

Well after a 7 minute spiel, I called the meeting off for the day and asked everyone to put away their cellphones and come sit down with me in the middle of the floor.

YES, this seems childish and non professional, but so is pouting and putting the Company down because of something you don’t agree with.

As the confusion set in as to why it seems like we are playing a round of Duck Duck Goose, I explained to them to that the meeting that was set for today will be sent to them in a Powerpoint and will be reviewed with them one on one at a set date.

For now, we need to clear out the negativity to be able to move forward.

Moving forward with a cloud hanging over ones head will NEVER allow one to go at their top speed due to the uncertainty of rain and zero traction.

– WOW, I just made that up. Copyright RENEGADERETAILER.

👉This meeting turned into a shitstorm as feelings about the company, coworkers, and everything in between came out.

So what does a Coach do in this situation? Just listen and nothing more.

I was blown away that even the quiet ones spoke up at first in a politically correct voice, but after gaining their confidence they let it rip.

THIS WAS AMAZING until…..they wanted to know my thoughts.

Ooooooh boy, do I tow the line or say what I continue to whisper to Rocky – my dog.

I chose the latter and spoke for a good 20 minutes, or should I say I told stories (real life experiences) for twenty minutes as I strongly believe a story sticks and downloading sucks d….(dunkaroos). Afterwards I opened the floor for further questions and comments.

Just as their portion ended 2o minutes a go, they picked up where they left off and continued to throw all their frustrations, comments and questions at me from all sides; if was I was goaltender this would be my Stanley Cup moment.

Did I block all the shots?

Nope, but the questions to which I wasn’t able to block were put in the parking lot to be answered at a later time and date.

As this trial by fire continued for a couple of more hours, somehow out of all the anger and resentment, the clouds started parting and as a group they started finding solutions to many of the opportunities and concerns that were launched toward me. It’s beautiful site to see when a Team comes together for a common cause and everyone starts rowing in the same direction. It’s cathartic.

👉 This meeting went on for another 2 hours and ended with a group lunch.

This was an emotional and heavy day for all, and after lunch I sent everyone home to take the rest of the day off. We could have continued the meeting, but the team needed the time to absorb everything and take time with each other (without me) to review the day.
This surprisingly was one of the most productive meetings I ever held, in a shortened time frame and no functional agenda. Now some may say nothing got accomplished, but in return I will retort by quoting Henry Ford:

Now I only needed to explain to my Manager why I just threw out close to 2000$ in wages to sit in a circle and work a half a day.

I let him know that the seed that was planted today will pay its dividend at the end of the year.

The following day I sent out an email thanking everyone for their honesty, transparency and emotions as it taught me a couple of things:

So did that 2000$ investment in salaries produce a measurable end result? Yesiree bob!

We won the Presidents Club cup that year for the first time in the District’s history and a Manager from my Team was nominated for the Manager of the Year; unfortunately he lost but being nominated is a reward in itself.

Call the sun in the dead of the night
And the sun’s gonna rise in the sky
Touch a man who can’t walk upright
And that lame man, he’s gonna fly
And I fly
And I fly
Neil Diamond

Please Follow my Mentalhealth Journey and Retail Madness Marathon
by ⭐SUBSCRIBING⭐ to both of my #RenegadeRetailer channels at:
👉YouTube:
http://www.youtube.com/c/RenegadeRetailer
👉Blog:
https://renegaderetailer.blog/
Have a PHENOMENAL day.
#thatisall

This site uses Akismet to reduce spam. Learn how your comment data is processed.